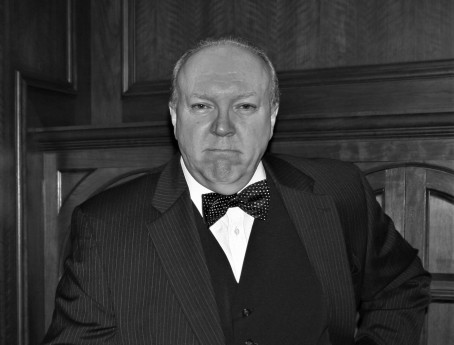 To see video clips of a 2016 performance, click here.

"An Evening with Winston Churchill" is now available to bring one of the most important leaders of the twentieth century to your library, campus, conference, or community event.

A veteran of offering one-man dramatic shows for over 30 years, Kevin Radaker is well prepared to perform for your event any one of the following four dramatic monologues that he has compiled himself:

No matter which of the above monologues you choose, each is infused with the marvelous wit and pugnacious personality of Winston Churchill, for he will spend the first 10-15 minutes humorously describing himself to some degree, including his tastes, habits and hobbies.

Throughout the entire monologue, Radaker's meticulous imitation of Churchill's voice and mannerisms will enhance a script that features the inspiring eloquence and sharp wit of the indomitable leader whom Time magazine recognized in 1950 as "the man of the half century."

After the dramatic monologue is offered, Kevin Radaker, the actor-scholar, can answer questions about Winston Churchill for 15-30 minutes, if the venue so desires.

For more information or to book a performance, contact Professor Radaker at kpradaker@anderson.edu

Professor Radaker's research efforts in developing this dramatic portrayal received support from the Anderson University Falls Fund for Faculty Development and from the Lilly Endowment.