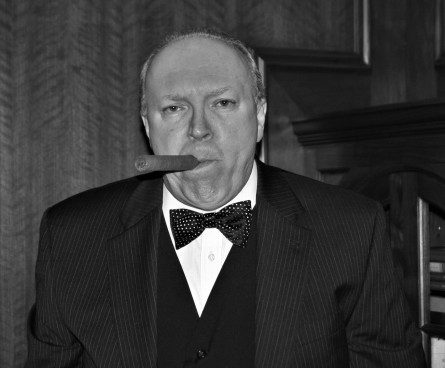 "Kevin Radaker as Winston Churchill is the complete Chautauquan! He is well-researched, engaging, entertaining, AND he even looks like Churchill. The voice was spot-on. At workshops and under the tent, Winston Churchill broke attendance records. You do not want to miss this fantastic presentation. Everyone who comes will leave knowing much more about this fascinating character."
--Kim Smith, Tulsa Chautauqua Co-Chair

"Kevin Radaker's 'Winston Churchill' is truly something special. Radaker captivates the audience by taking on Churchill's mannerisms, his booming voice, and even the gleam in Churchill's eye that I imagine he exhibited when saying something particularly witty. Radaker's World War I show is well researched, shedding light on a Churchill few people know. If you are thinking about booking Kevin Radaker for a Winston Churchill show, stop thinking about it and book him! You will not be disappointed!"
--Sarah Schaefer, Director of Education, Museum on Main, Pleasanton, California

"From the very first moment Winston Churchill takes his place on the stage, the audience is transfixed, transported, and transformed by Kevin Radaker's captivating portrayal.  He offers us not just the facts but the very psyche of Churchill as he reflects upon timelines and historical events that brought us to where we are today."
--Michael Dirse, Performance Coordinator, Lakewood Public Library, Lakewood, Ohio

"When Professor Kevin Radaker dons bow tie and three-piece suit to transform himself into Britain’s greatest statesman, it is evident that his script is well-researched. This is not just another Churchill impersonation, for the professor provides a fine accounting of Churchill’s long career with proper verve and diction. Many of our members have expressed their gratitude for my having invited him to our July 2019 gathering, and he receives my highest recommendation as well."
--Leon J. Waszak, Chair, Southern California Churchillians, Los Angeles, California

"In answer to our 2017 theme, 'Echoes of World War I,' Kevin Radaker demonstrated his excellent scholarship by bringing to life the Churchill of the World War I period. His appearance, diction, and mannerisms made it easy to imagine that we were in the presence of Churchill himself. Through his evening portrayal, our audience learned to appreciate Churchill’s less well-known roles during and after World War I. And finally, of significance to program coordinators, Kevin is always a great pleasure to work with."
--Jane Adams, Program Coordinator, High Plains Chautauqua, Greeley, Colorado

"Kevin Radaker's superb interpretation of Winston Churchill kept me seated bolt upright the whole time; he is that fine a storyteller. Winston recalls the dark days of World War II and his dogged struggle against Hitler and fascist tyranny. And it doesn’t end there. We feel we’re at the Waldorf in ’46, listening as Churchill again rings the tocsin, this time against post-war Soviet aggression — a warning that sounds eerily relevant today. Kevin Radaker captures the spirit not only of Churchill’s time, but of all time."
--Edwin W. Hoffman, Creator and Host of "Speaking of Art," Ann Arbor, Michigan

"Dr. Radaker's portrayal of Winston Churchill was exceptional, riveting, and perfectly performed. I was completely absorbed by his mannerisms and depth of knowledge and forgot that it was not actually Churchill. Don't miss the opportunity to witness this enchanting performance."
--Andi Holland, Museum Director, Cherokee Strip Regional Heritage Center, Enid, Oklahoma

"In all of my interactions with Kevin Radaker in the last decade, I have been greatly impressed by his meticulous scholarship, his brilliance in connecting with the audience, and his unflagging determination to fine tune his presentations in every way possible.  He is a great Chautauqua scholar, the consummate public historian, and it is a delight to work with him."
--Ron Edgerton, Professor Emeritus of History, University of Northern Colorado, Greeley, CO​

"Our library had the pleasure of hosting Dr. Kevin Radaker for the full version of his splendid 'Churchill.' The program was exemplary: the stage presence, vocal mannerisms and inflections, content, and above all rapport with the audience. His portrayal captured both the towering rhetoric of an incomparable icon and the everyday touches of the simple man. A truly outstanding show – highly recommended."
--Patrick Manning, Nordonia Hills Branch Library, Northfield, Ohio

"Kevin Radaker's performance as Winston Churchill transported our audience to that time in history when the world was still traumatized by World War II and entering the Cold War. We were all mesmerized, feeling as if Mr. Churchill was truly in our midst."
--Joyce A. Smidley, President of the Poland Historical Society, Poland, Indiana

"Kevin Radaker's portrayal of Winston Churchill in the 2016 Oklahoma Chautauqua, which focused upon Churchill's view of the Cold War, reflected Radaker’s reputation as a stellar Chautauqua scholar.  In the Q&A portion of the performance, Radaker nailed Churchill's eloquence and sly wit with adroit responses to a wide range of audience queries."
--Frantzie Couch, Chautauqua Committee, Lawton, Oklahoma

"As Winston Churchill at the High Plains Chautauqua in 2017, Kevin Radaker's programs were informative, well organized, and thought provoking.  His interpretation of the World War I era Winston Churchill highlighted Kevin’s gift for presenting complicated historical material in a way that is accessible to a general audience, while also demonstrating that history is fluid, arduous, and messy."
--Gina Huett, Program Coordinator, Colorado Humanities, Greenwood Village, Colorado

"In presenting his World War I dramatic show as Winston Churchill, Kevin Radaker kept the San Francisco Eastbay audience in rapt attention. We especially loved speaking to him as Churchill during the question-and-answer session after the dramatic monologue."
--Candy Campbell, DNP, RN, CNL, actor-scholar and author of Channeling Florence Nightingale

"Kevin Radaker masterfully recreates the incomparable figure of Winston Churchill. His attention to detail and historical accuracy is admirable, including responding to audience questions after the monologue while still in character. The voice, the posture, the wit, the eloquence – all are woven together in wonderful symmetry, reminding us of the Churchill who led his country through World War II and its 'finest hour.'"
--Jaye Lee Rogers, Ph.D., Professor of History, Anderson University, Anderson, Indiana