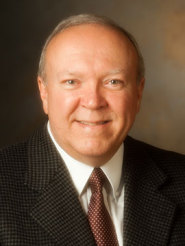 Kevin Radaker is Professor Emeritus of English, Anderson University, Anderson, Indiana. He began offering his portrayal of Winston Churchill during the summer tour of the 2016 Oklahoma Chautauqua.

Professor Radaker is a veteran of offering one-man dramatic shows. Since 1991, he has offered his highly acclaimed portrayal of Henry David Thoreau over 400 times at universities, colleges, libraries, conferences, state and national parks, and his "Thoreau" has been engaged by fifteen summer Chautauqua tours throughout the United States.

In 2009, as part of the "John Brown and New England" program, he offered his "Thoreau" on the 150th anniversaries of Thoreau's spirited defense of John Brown in Concord, Boston, and Worcester, Massachusetts.  In addition, since 2009, he has presented his portrayal of C. S. Lewis over 70 times in several states and at an international teachers' conference in 2011 in Beijing, China.

In addition to his performances, he has published articles on Thoreau, Herman Melville, Annie Dillard, and Wendell Berry in encyclopedias and academic journals. His teaching duties at Anderson University included several upper-division courses in American literature as well as two courses entitled "Christianity and Literature" and "Valuing through Literature." For more information on his portrayals of Thoreau and Lewis, see his websites at www.thoreaulive.com and www.cslewislive.com.  To contact him for an engagement, his email address is kpradaker@anderson.edu